When you want to learn about a culture it is important to look at the family unit and its importance and how it is viewed. The Aztec Family unit looks much different than the traditional view of an American family and this is due to the influences within the culture. 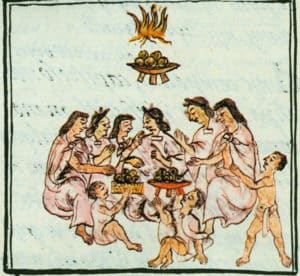 Aztec society was a patriarchal society in which the men led the family and ruled within the government.

The Aztec family was structured with the man as the head of the home and his primary wife. His primary wife was given the most significant ceremony and the children he had with her were considered his inheritors.

The husband usually had many wives that were considered secondary wives and ideally he was supposed to treat each of his wives equally. The children from these marriages were not considered his inheritors.

Usually the wealthy members of Aztec society had large families with many wives while it was more common for the poor citizens to have one wife.

Women had much power, but as time continued and the Aztecs became a larger empire it seemed as if the influence and power of women dwindled. While they still had much influence on their families, their influence in public life waned, especially those who were not considered the primary wife.

Ironically, adultery was a capital crime. So women who shared a husband could be put to death if they cheated on their husband with another man, but the man could have many sexual relationships with women as so long he married them. It was a contradiction, but one that was common within the ancient world.

The family structure was much different than that of the Europeans. Europeans had become influenced by the Bible which promoted one wife and had shook off the polygamy practices of the previous centuries. However, the sexual promiscuity was similar in both cultures.

It was common for the Spanish under Hernan Cortes to pillage and rape the native women that lived throughout Mexico. The Aztecs followed similar practices.

Education fell to the parents and there were different branches of education as the child became older.

Aztec society was built on the warrior so much of their education was a military education. As a result their discipline was often harsh and would try and prepare the child for Aztec realities. Kids often grew up well mannered and disciplined.

Being such a military society it was common for families to break up due to a father’s long absence or death on the battlefield.

If an Aztec survived to old age they would become known as ueuetque and considered a wise member of society. They would become esteemed members within the culture. Their health care was based on Aztec religion and ritual.