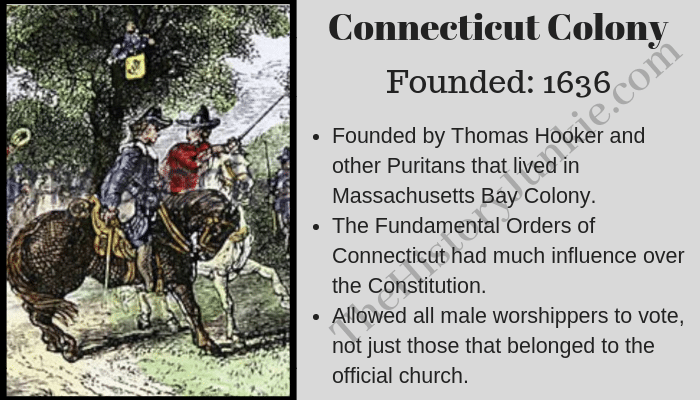 Connecticut Colony known as the River Colony was organized on March 3, 1636, as a place for Puritan noblemen. Early on, the English settlers under John Winthrop Jr. struggled with the Dutch for possession of the land, but the English eventually gained control of the colony and set up a permanent settlement there.

Later on, the colony was thrown into a bloody Indian war (Pequot War) between the English and Native Americans. Connecticut would go on to play an important role in self-government due to its founder, Thomas Hooker.

Hooker led 100 settlers with 130 heads of cattle to the banks of the Connecticut River where he set up the colony of Hartford. Two years later in 1638 Hooker would preach a sermon on the principles of government that would lead to the Fundamental Orders of Connecticut.

The Fundamental Orders of Connecticut influenced the Declaration of Independence. Connecticut colony would join with the other New England Colonies at the Second Continental Congress and declare freedom from Britain.

The delegates that would become the infamous Signers of the Declaration of Independence were: Roger Sherman, William Williams, Samuel Huntington, and Oliver Wolcott.

The New Haven Colony was settled in 1638. The settlers were one of the first colonists to treat the Native Americans honestly and justly. They bought the land that they settled from the natives.

This, in turn, created a good relationship between the two. However, the colony was not chartered and many of the competing colonies tried to absorb New Haven.

The colonists did eventually allow themselves to be absorbed by a larger colony and when they did they chose Connecticut.

Unlike the Massachusetts Bay Colony, Connecticut did not require everyone to be a member of a particular church to vote.

After the era of the Commonwealth under Oliver Cromwell had passed, Charles II took the throne. John Winthrop Jr., the governor of the Connecticut Colony went to England to secure a charter for the colony. Charles II granted his request in 1662.

The charter of the colony covered both the Connecticut Colony and the New Haven Colony and they were permitted to choose their own assembly, their own governor, and rule themselves with minimal interference.

New Haven was reluctant to give up its independence and deliberated for some time before coming to a decision to merge with the Connecticut Colony. Once merged the colony was called the Colony of Connecticut.

In 1687, Governor Andros led a company of soldiers from Boston to Connecticut and ordered that they surrender their charter. Apparently, the king of England did not appreciate the independence the colony had and had used to conduct their business.

Andros came down and confronted the assembly that was gathered in Hartford. The colonists pleaded that he would hear their arguments, which he reluctantly did. Their arguments did little to persuade his intentions.

The two sides continued to argue until it was dark. Once it was dark candles were lit, however unbeknown to Andros the colonists had devised a plan to take the charter.

Without warning or hesitation, a signal was given and every candle was blown out at the same time leaving the colonists and Andros standing in complete darkness.

Once the candles were re-lit the charter, which was laying on the table in view of everyone, was now gone. Andros railed against the colonists who denied that they had done anything. Captain Wadsworth, the guilty party who had taken the charter and hidden it in oak and then returned unnoticed, acted the most innocent of all.

Andros swore that this would have no effect on the outcome.

Two years later Andros was no longer in office and the charter was brought out of hiding.

Unlike Plymouth, Rhode Island, and New Hampshire, Connecticut Colony was founded by the Puritans of Massachusetts Bay. Each colonist would be fined if they did not attend the local church.

Eventually, the Puritans allowed for dissenting churches (Anglicans and Baptists) and the dissenting colonists could avoid a fine if they supported their own church instead.

By 1708 the colony adopted the Saybrook Platform which took church sovereignty away from the local congregations and placed it in the hands of a colony-wide association controlled by ministers.

The First Great Awakening changed the entire landscape of religion in Connecticut. It ripped the Congregational church in half with those supporting the teaching of the Great Awakening being called “New Lights” and those not supporting it are called, “Old Lights.”

New Lights sought a more emotional church experience one which the Old Lights disagreed and fought them on. The New Lights were in a precarious situation because they were not actually dissenters since they still attended the Congregational Church.

This allowed the Old Lights to argue two things against them,

The Old Lights managed to pass an Itineracy Law which restricted traveling ministers of the Great Awakening to preach in a Connecticut town without an invitation.

The Congregational Church remained Connecticut’s state church until 1818 when Connecticut adopted a new Constitution which disestablished it.

During the American Revolutionary War, the Anglicans often remained loyal to the crown while the others did not.

However, this did not cause a division within the colony. In fact, the Connecticut colony was the only colony in New England and the other 13 Colonies do not have an internal revolution.

This was due to the consistency of the Connecticut government.

The Fundamental Orders of Connecticut remained in place until the U.S Constitution was ratified.

Although there was not any internal conflict during the American Revolution, that does not mean that the Connecticut Colony did not feel the Revolution on its own soil. Danbury, Connecticut was burned due to its role in harboring patriot ammunition.

The British army was then engaged on its way back to Boston in the Battle of Ridgefield. The commanding officers for the patriots were General David Wooster and General Benedict Arnold.