The Presidential Election of 1896 took place after The Panic of 1893 had sunk the nation into a recession. Many were out of work and riots had taken place in some areas.

Grover Cleveland did not want to seek a second term as President and the Democrats nominated the charismatic William Jennings Bryan as their nominee.

The Republicans nominated William McKinley who partnered with big businesses. Men such as Andrew Carnegie, John D. Rockefeller, and JP Morgan had much interest in his campaign.

This would be a different campaign than previous presidential elections in that McKinley would finance his campaign by appealing to business owners rather than asking government workers to help finance the election.

There were several third and fourth party candidates that influenced issues.

The Candidates were as follows:

Republicans: McKinley was in favor of big business and high tariffs. The McKinley campaign invented a new form of campaign financing that has dominated American politics ever since. Instead of asking office holders to return a cut of their pay, Hanna went to financiers and industrialists and made a business proposition. He said Bryan would hurt business if he were elected. McKinley’s war chest put many attacks on Bryan and they were effective.

Democrats: William Jennings Bryan came from nowhere. He had a failed run for an office prior, but he was an electric speaker. The Bryan campaign appealed first of all to farmers. It told urban workers that their return to prosperity was possible only if the farmers prospered first. Bryan made the point bluntly in the “Cross of Gold” speech, delivered in Chicago just 25 years after that city had indeed burned down.

William McKinley’s portrayal of William Jennings Bryan as a radical revivalist was effective in certain parts of the country.

Couple this with Bryan’s appeal to the rural population while ignoring the urban centers of commerce did not go over well with those in the city.

Despite his charisma, Bryan was unable to overcome the war chest of McKinley. William McKinley rolled with winning 271 Electoral Votes.

It was somewhat less, however, than the combined vote for the Democratic and Populist nominees had been in 1892. In contrast, McKinley received nearly 2,000,000 more votes than had been cast for Benjamin Harrison, the Republican nominee, in 1892. The Republican vote was to be but slightly increased during the next decade. 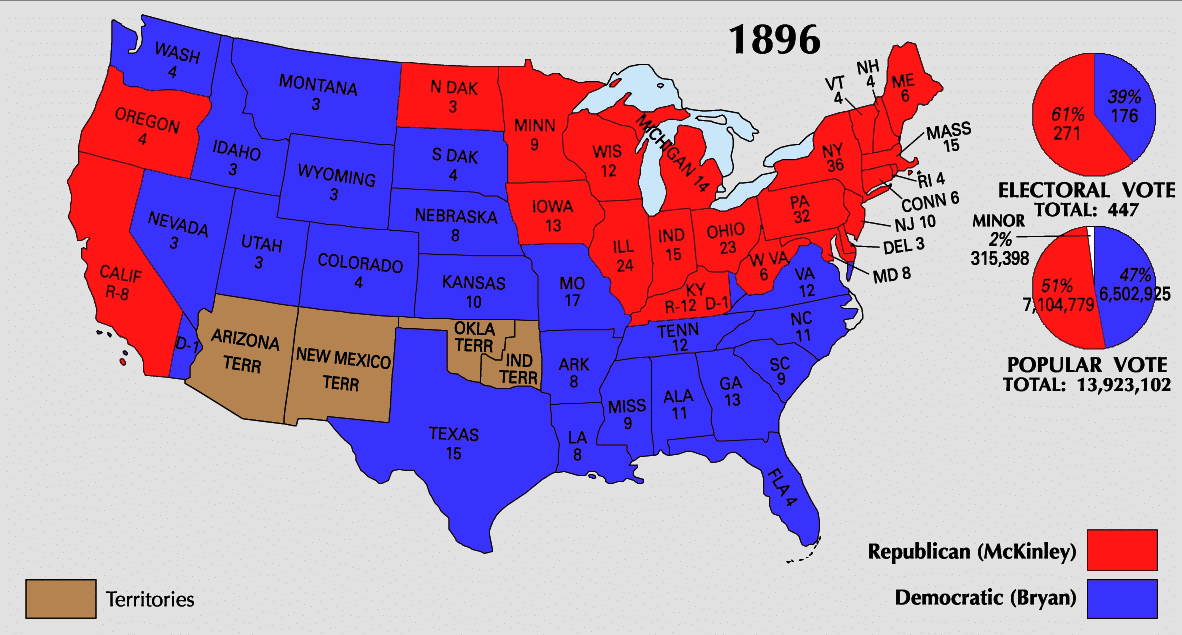