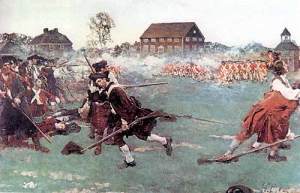 Thanks to the work of Paul Revere and William Dawes the provincials were able to muster at Lexington shortly before the British arrived.

While it was just a handful of men against many more British, the battle of Lexington did create concern for the British as their mission was to be a secret and they did not expect much resistance until Concord.

Technically, The British won the Battle of Lexington as they were able to drive the provincials from the field, but Captain John Parker and his minutemen would get their revenge when the British retreated from Concord.

Read the specifics of the battle below.

Read the full article of the Battles of Lexington and Concord

The British troops marched into Lexington and saw the seventy-six-minute men standing on the Lexington Green.

Instead of continuing their march towards Concord they took a hard right and lined up face to face with the provincials.

The provincials eased backward towards a stone wall and began to disperse. The commander of the advance guard, Major John Pitcairn, rode to the left of the meetinghouse and separated himself from his men and lost control of them.

Parker saw that the British army was heading towards his men and ordered them further north off of Concord road. It did little to curb the confusion and the rebels continued to fall back.

At that point, it seemed as though Parker was going to try and avoid confrontation and allow the British to continue down the road, but in the midst of confusion, Pitcairn began barking out conflicting orders that further confused his men.

A shot was fired and it will never be known who pulled the trigger first. It seems unlikely that Parker or his men would be the culprits, but it could have been a provincial sniper.

After the shot, the British soldiers fired a volley and then began to chase the scattered minutemen. The action was unorganized and at times, chaotic. Professional British soldiers that would show great discipline throughout the war were amateurish.

Pitcairn continued to try and reorganize his men but was unable to do so. The chaos would continue until Major Francis Smith arrived and sounded a ceasefire. Pitcairn, who would gain recognition for his bravery at Bunker Hill, should have commanded his men better.

Pitcairn claimed that he wanted to surround the minutemen and then disarm them, which may be true. However, he had written his true sentiments to a superior of his six weeks prior that read:

Orders are anxiously expected from England to chastise those very bad people. The General had some of the Great Wigs, as they are called here, with him two days ago, when he took that opportunity of telling them, and swore to it by the living God, that if there was a single man of the King’s troops killed in any of their towns he would burn it to the ground. What fools you are, said he, to pretend to resist the power of Great Britain; she maintained last war three hundred thousand men, and will do the same now rather than suffer the ungrateful people of this country to continue in their rebellion. This behaiviour of the General’s gives great satisfaction to the friends of the Government. I am satisfied that one active campaign, a smart action, and burning of two or three of their towns, will set everything to rights. Nothing now, I am afraid, but this will ever convince these foolish bad people that England is in earnest.

After the fog lifted and the British were reorganized there were eight-minute men that lay dead and nine wounded. The British suffered one dead and one wounded.