William Prescott was a colonel during the American Revolutionary War and commander of the rebel forces at the Battle of Bunker Hill. He is known for his famous line, “Do not fire until you see the whites in their eyes” so that the men would hold their fire until the British were close enough and the rebels could do significant damage to them.

William’s great-grandfather, John Prescott was the founder of Lancaster, Massachusetts and one of the first settlers in the colony. John brought the Prescott name to the New England Colonies and would be the great-grandfather to two other Prescotts that gained fame for their actions during the Midnight Ride, Samuel Prescott and Abel Prescott.The Prescott line is filled with veterans from each of the wars the US fought in. William Prescott’s great-great-great-grandson was William Linzee Prescott who fought in World War II and was captured by the Germans. Ironic that his 3x great-grandfather fought the British to gain our independence and Linzee was captured by the Germans while fighting alongside Great Britain. 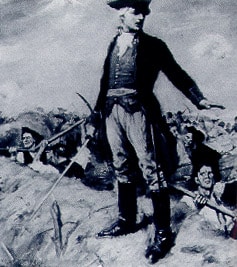 When Artemas Ward, Israel Putnam, and other provincial commanders learned that the British planned on taking the high ground around Boston they ordered William Prescott to take 1,200 men and construct defenses on Bunker Hill. Prescott actually built defenses on Breed’s Hill due to its proximity to the harbor.

His men worked all night to build adequate defenses and the next morning General William Howe began his assault on their positions. Howe severely underestimated Prescott and the colonists and was beaten back twice before the colonists ran out of ammunition and retreated. Howe lost over 1,000 men and was unable to keep the hill although they took the field that day. Technically Prescott and his men lost the battle, but the beating the British took was so severe that they could not break the siege.

Throughout the rest of the war Prescott participated sparingly. He did participate in the debacle of the Battle of Long Island and he participated in some capacity at Saratoga.

Prescott served in the Massachusetts General Court in later years. He also served in the militia called out in 1786 to suppress Shays’ Rebellion. His brother Oliver Prescott was said to be influential in the suppression of that outbreak. William died in 1795 in Pepperell and is buried there in Walton Cemetery, “surrounded by the graves of Pepperell men he led at Bunker Hill”