The Seneca Tribe was located in modern New York between the Genesee River and Canandaigua Lake.

They were part of the Iroquois Confederacy and one of the more dominant Northeast Indian Tribes. It is believed that their territory extended to the Allegheny River and this was due to the Iroquois successful conquest of the Wenrohronon and Erie nations in the 17th century.

The Seneca were the most populous tribe within the Iroquois Confederacy. Two of their largest cities were Ganondagan and Chenussio. Ganandagan had 150 long houses and Chenussio had 130 longhouses.

Due to their population and military strength they executed far-reaching military campaigns. They dominated the political landscape during their peak which was seen during the Beaver Wars.

The Seneca had two branches; the western and the eastern. Each branch distinct, they were individually incorporated and recognized by the Iroquois Confederacy Council. The western Seneca lived predominately in and around the Genesee River, gradually moving west and southwest along the Erie and Niagara rivers, then south along the Allegheny River into Pennsylvania.

The eastern Seneca lived predominantly south of Seneca Lake. They moved south and east into Pennsylvania and the western Catskill area.

The Seneca used the Genesee and Allegheny rivers, as well as the Great Indian War and Trading Path (the Seneca Trail), to travel from southern Lake Ontario into Pennsylvania and Ohio. The eastern Seneca had territory just north of the intersection of the Chemung, Susquehanna, Tioga and Delaware rivers, which converged in Tioga.

The rivers provided passage deep into all parts of eastern and western Pennsylvania, as well as east and northeast into the Delaware Water Gap and the western Catskills. The men of both branches of the Seneca wore the same head gear.

Like the other Haudenosaunee, they wore hats with dried cornhusks on top. The Seneca wore theirs with one feather sticking up straight. 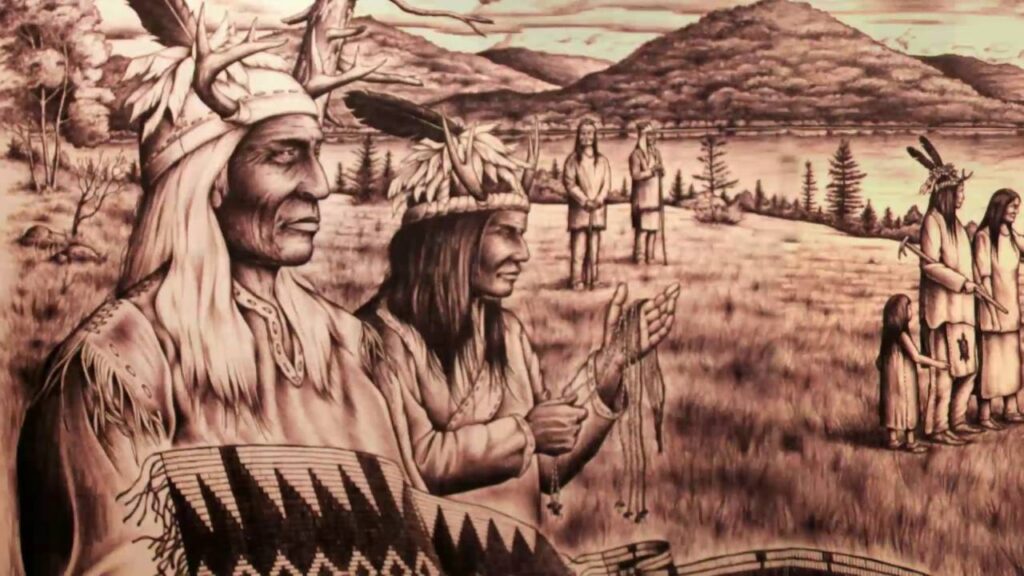 The first European contact with the Seneca Tribe was the Dutch and shortly after the British. They participated in the lucrative fur trade which also increased hostilities with tribes also participating in the trade.

One of these traditional rivals was the Wyandot (also known as Huron) tribe who had allied themselves with the French. This would begin the Iroquois-Huron War that would go on for over 40 years. During the rest of the 17th century the Seneca would become one of the most powerful tribes in the Northeast.

Led by the Seneca, the Confederacy began a near 35-year period of conquest over surrounding tribes following the defeat of its most powerful enemy, the Huron (Wyandot). The Confederacy conducted Mourning Wars to take captives to replace people lost in a severe smallpox epidemic in 1635. Through raids, they stabilized their population after adopting young women and children as captives and incorporating them into the tribes.

By the winter of 1648, the Confederacy, led by the Seneca tribe, fought deep into Canada and surrounded the capital of Huronia. Weakened by population losses due to their own smallpox epidemics as well as warfare, the Wyandot unconditionally surrendered. They pledged allegiance to the Seneca as their protector. The Seneca subjugated the Wyandot survivors and sent them to assimilate in the Seneca homelands.

In 1675, the Seneca defeated the Andaste Seneca Susquehannock to the south and southeast. The Confederacy’s hegemony extended along the frontier from Canada to Ohio, deep into Pennsylvania, along the Mohawk Valley and into the lower Hudson in the east.

They sought peace with the Algonquian-speaking Mohegan, who lived along the Hudson River. Within the Confederacy, Seneca tribe power and presence extended from Canada to what would become Pittsburgh, east to the future Lackawanna and into the land of the Minnisink on the New York /New Jersey border.

In 1685, after decades of conquest the Seneca felt the sting of war from the French. King Louis XIV sent Marquis de Denonville to govern New France. When Denonville arrived he immiediately began plans to attack and destroy the Seneca.

In 1687, landed a French armada at Irondequoit Bay. Denonville struck straight into the seat of Seneca power and destroyed many of its villages, including the Seneca’s eastern capital of Ganondagan. Fleeing before the attack, the Seneca moved further west, east and south down the Susquehanna River.

Although great damage was done to the Seneca home land, the Seneca’s military might was not appreciably weakened. The Confederacy and the Seneca moved into an alliance with the British in the east.

Despite the French military campaigns, Seneca power remained far-reaching at the beginning of the 18th century. Gradually, the Seneca began to ally with their trading partners, the Dutch and British, against France’s ambitions in the New World. By 1760 during the French and Indian War, they helped the British capture Fort Niagara from the French. The Seneca had relative peace from 1760 to 1775.

In 1763 a Seneca war party ambushed a British supply train and soldiers in Battle of Devil’s Hole, also known as the Devil’s Hole massacre, during Pontiac’s Rebellion

When the American Revolution began the tribes within the Iroquois Confederacy tried to remain neutral. This would prove to be impossible and the result would be the split of the Confederacy.

The Mohawk, Onondaga, Cayuga, and Seneca sided with the British, and the Tuscarora and Oneida sided with the Americans. The confederacy would begin to fight against each other and the fighting would not end until after the war.

The Seneca would play a role in many different battles during the Revolutionary War:

The remaining Iroquois left after the Sullivan’s Expedition would continue to raid American settlements. At the end of the war the once proud confederacy no longer existed. The Seneca people would relocate.