The Chinook Tribe is a Northwest Indian Tribe located in the present-day state of Oregon.

They are a Chinookan speaking tribe that encountered Lewis and Clark in 1805 while they were exploring the Louisiana Purchase that was purchased by President Thomas Jefferson. 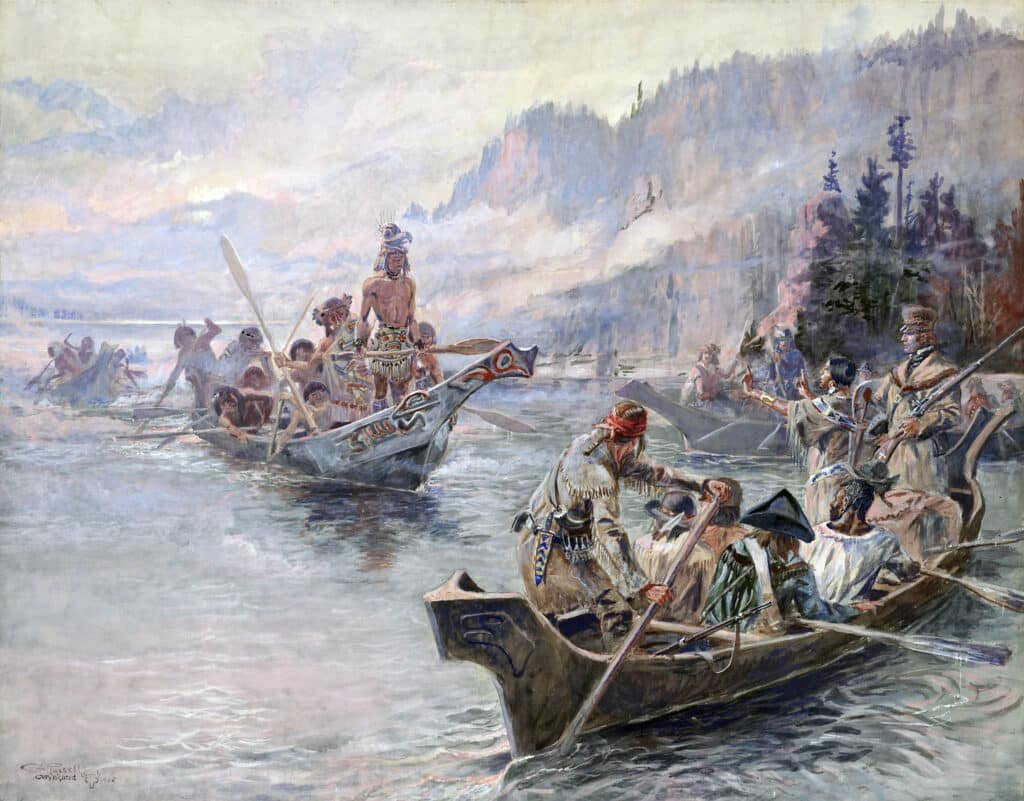 There are several theories about where the name ″Chinook″ came from. Some say it is a Chehalis word Tsinúk for the inhabitants of and a particular village site on Baker Bay, or “Fish Eaters”. It may also be a word meaning “strong fighters”.

The Chinook tribe was a traditional Native American tribe. They lived in the same geographic area for centuries and built their diet on the game and fish they caught. Salmon was the most popular and most plentiful of the meat they ate.

The women would gather hile the men would hunt. They would gather such things as nuts, seeds, roots, and other foods that were native to the region.

They had a society marked by social stratification, consisting of a number of distinct social castes of greater or lesser status. Upper castes included shamans, warriors, and successful traders. They composed a minority of the community population compared to common members. Members of the superior castes are said to have practiced social discrimination, limiting contact with commoners and forbidding play between the children of the different social groups.

Some Chinookan peoples practiced slavery, a practice borrowed from the northernmost tribes of the Pacific Northwest. They took slaves as captives in warfare, and used them to practice thievery on behalf of their masters.

The latter refrained from such practices as unworthy of high status.

The wealthy class practiced head binding. They would flatten their children’s forehead and top of the skull as a mark of social status. To do this they would tie the infant’s headunder bressure between boards. This would begin when the baby was 3 months old and would continue until they reached a year of age.

This custom was a means of marking social hierarchy; flat-headed community members had a rank above those with round heads. Those with flattened skulls refused to enslave other persons who were similarly marked, thereby reinforcing the association of a round head with servility. The Chinook were known colloquially by early white explorers in the region as “Flathead Indians.”

In the manner of numerous settled tribes, the Chinook resided in longhouses. More than fifty people, related through extended kinship, often resided in one longhouse. Their longhouses were made of planks made from red cedar trees. The houses were about 20–60 feet wide and 50–150 feet long.

The Chinook tribe endured disease like all the Native Americans.

While there were many diseases that hurt or killed the Indians, none were as severe as smallpox.

William Clark noted during his travels that he met a Chinookan with spots and that smallpox had destroyed their nation.

Millions of Native Americans died due to not having a strong enough immune system to combat the European diseases and it led to a pandemic that is not often talked about and one of the worst in the history of civilization. Millions of natives died and with it their power. Their population decreased quickly and would allow for settlers to expand into their lands much more quickly if they had not had to deal with death during disease.