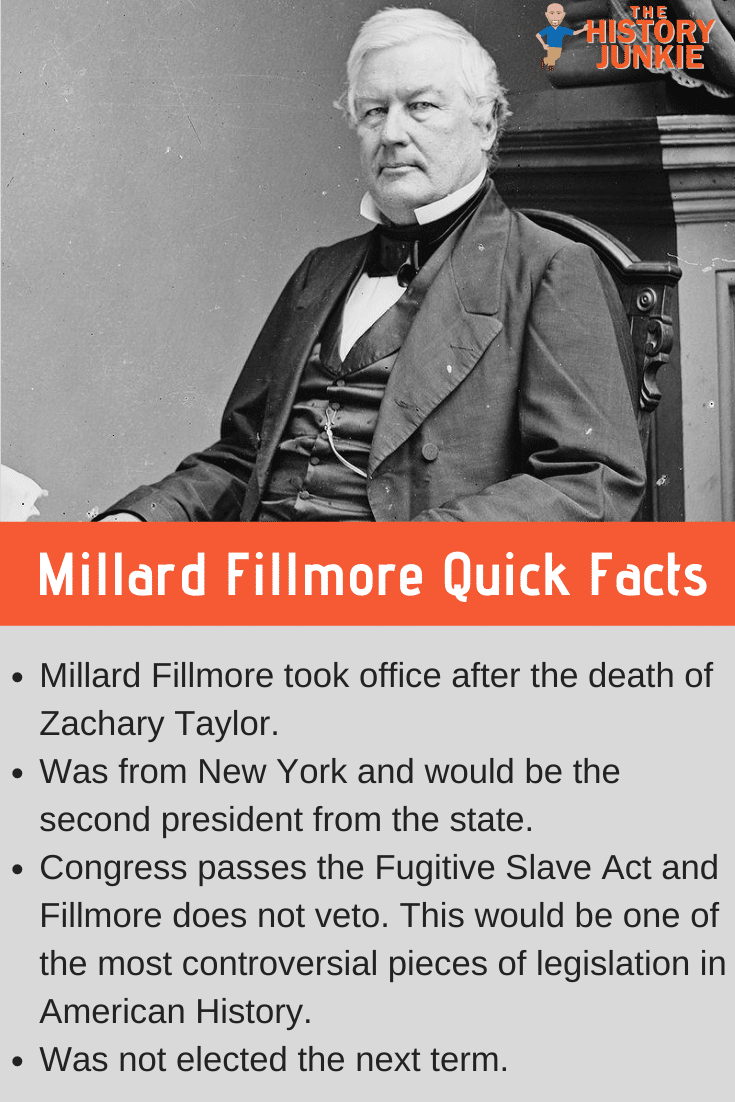 When President Millard Fillmore took office in 1850 the nation was in turmoil. Pro-Slavery and Abolitionist debates dominated the political landscape with clear lines being drawn.

The land acquired after the Mexican-American War would make matters worse because the country had to decide whether to admit a state as free or slave. This was a delicate issue because it could possibly overthrow the balance of power in Congress.

July 10, 1850: Fillmore was sworn in as President: The day after Zachary Taylor‘s death Millard Fillmore is sworn into the oval office. Taylor’s cabinet resigns and Fillmore replaces them with pro-Union and pro-Compromise members including Daniel Webster as his Secretary of State.

August 6, 1850: Fillmore affirms support for Compromise of 1850: Trying to keep the peace Fillmore begins a series of compromises. Texas and New Mexico make a deal resolving a border dispute and Fillmore seeks to repeal the Wilmot Proviso, which closed all land won from Mexico to slavery.

September 9, 1850: California is admitted to the union as a free state: This was part of the Compromise of 1850. The Utah Act was also passed which established the Utah Territory as open to slavery. Brigham Young was named governor of the territory.

September 18, 1850: Congress passes the Fugitive Slave Act: One of the most controversial legislation ever passed was the fugitive slave act. The new law would threaten individuals who help runaway slaves with fines and imprisonment. It also required that slaves be returned to their owners without the right of a jury trial. This act was much harsher on those that would not enforce, unlike its predecessor.

September 20, 1850: Congress bans slave trade in the District of Columbia: This was the last of the five bills that made up the Compromise of 1850.

January 2, 1851: Congress ratifies the first commercial treaty between the United States and El Salvador: This was the first country to declare a Constitution in Central America.

November 24, 1852: Diplomacy in Japan: Fillmore sends Commodore Matthew Perry to Japan to seek to open trade relations. He wanted to open routes with Japan through San Francisco, Hawaii, and Shanghai.

Abigail Powers Fillmore held a paying job before and during her marriage – a first for a First Lady. Married in 1826, the couple struggled financially but eventually reached a point where she could quit work as a school teacher and devote herself to family life.

After Zachary Taylor’s death on July 9, 1850, Fillmore and his wife moved into the White House. A graceful, bust socially subdued and physically weak First Lady, Abigail Powers often relied on her daughter Abby to fill in as hostess. She did make a substantial lasting contribution as First Lady, however, as she was the first to create a White House library.

The Millard Fillmore Presidency is one of the most unremarkable and studied presidencies in American History. However, considering the state of the country, it was a fairly successful presidency.

He accomplished California becoming a state and organized two territories. He successfully navigated the Compromise of 1850 which held the country together for another 10 years but still created enemies in both parties.

In 1856, Millard Fillmore unsuccessfully ran for president as a nominee of the know-nothing party.