The Election of 1800 was an important event in American History.

1800 was a time of political transition from Federalists to Democratic-Republicans. There were new political leaders emerging, yet the generation of the Revolutionary War still maintained most of the influence.

This would also be the 2nd election that put John Adams and Thomas Jefferson against one another.

The father of our country and the most powerful man in America died in 1799.

For almost 25 years, George Washington had been the steady leader out in front and had directed the country through many trying times.

However, in 1799 he died and the nation mourned. His voice or endorsement would no longer hold influence in the political realm.

In the election of 1796, John Adams defeated his friend Thomas Jefferson in a close election. Thomas Jefferson would then serve as Adams’ Vice President, but due to conflicting interests was not able to serve faithfully under his old friend.

The friendship dissolved and the election of 1800 became the first nasty national public election. There were many accusations levied against both opponents.

In the end, Thomas Jefferson emerged victoriously and although he did not leave in a classy way, John Adams did leave the White House.

This would be the first successful transfer of power to an opposing power in the History of the United States.

John Adams had a miserable presidency, although many of his ideas and accomplishments would be realized later.

Adams was not a true Federalist as he did not agree with Alexander Hamilton and found him to be repulsive. Hamilton was the leader of the Federalist party and wanted to find someone who would support his agenda.

In the end, he finished 3rd, behind Thomas Jefferson and Aaron Burr.

Elections operated much differently than they do now and winning the state did not necessarily mean that you won all the electoral votes of that state, in fact, most of the time you didn’t.

The Democratic-Republican nominee was Thomas Jefferson, but they also had another candidate that ran which was Aaron Burr. At the end of the electoral process, Thomas Jefferson and Aaron Burr were tied in electoral votes which meant that had to be another vote to break the tie.

Most Democratic-Republicans wanted Thomas Jefferson to be their candidate and Aaron Burr to be the Vice-President. They wanted Burr to step aside, however, he didn’t.

Instead, he campaigned and was able to use Federalist hatred against Jefferson to flip their votes from Adams to Jefferson.

Alexander Hamilton, Jefferson’s biggest detractor, launched a vicious letter campaign in which he supported Jefferson and not Burr. He believed Jefferson was a man of high character, but the wrong ideology while Aaron Burr was a man devoid of any character and not loyal to an ideology.

The Federalists changed their vote and Burr would be elected Vice-President. This would set into motion events that would lead to the infamous duel between Hamilton and Burr.

Fact 5: Voting began in April and Ended in October

Because each state could choose its own election day in 1800, voting lasted from April to October.

In April, Burr’s successful mobilization of the vote in New York City succeeded in reversing the Federalist majority in the state legislature to provide decisive support for the Democratic-Republican ticket.

With the two parties tied 63–63 in the Electoral College in the autumn of 1800, the last state to vote, South Carolina, chose eight Democratic-Republicans to award the election to Jefferson and Burr.

Fact 6: This Election Would Lead to Changes for 1804

The first couple of elections in 1789 and 1792 had a flaw within them, however, the flaw was hidden due to George Washington being so popular and John Adams have a good relationship with Thomas Jefferson prior to the election of 1796.

This would hurt the agenda of the sitting President and if the President were to die then he would be replaced by someone who he did not select.

It also showed serious flaws when Aaron Burr was able to draw Federalist support since many Federalists hated Jefferson and wanted to hurt him by voting in Aaron Burr.

This election escaped disaster, but the country understood that political parties were a reality and needed to be accepted.

This led to the ratification of the 12th Amendment.

In 1804, the Federalists and Democratic-Republicans both created their own ticket which named their Presidential nominee and Vice President if they were to be nominated.

John Adams came in third with 65

Charles Pinckney (backed by Alexander Hamilton) came in fourth with 64 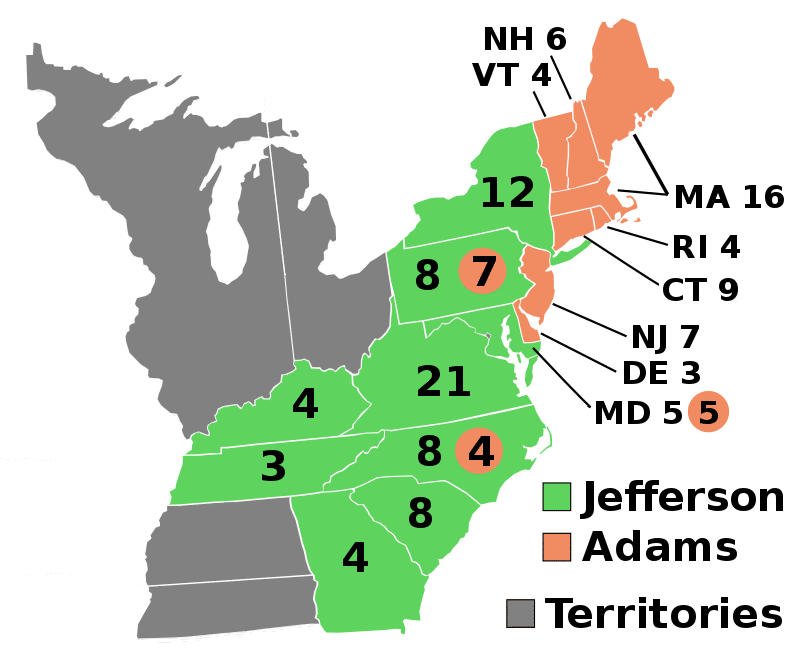